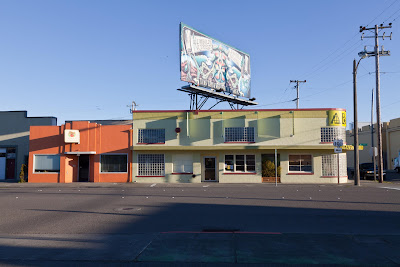 The above images are but a sampling of what I made yesterday morning in Eureka. It has been quite awhile since I actually went out photographing. I also took numerous images of the Lloyd Building on Fifth Street. Yesterday was the first time that I was able to photograph the east wall without there being any cars in the lot.

I think there are some images that I would like to rephotograph. I think that Jobu Shin Kan could use a slightly tighter composition. I must admit that I do like the cracks in the asphalt, and the white lane markers. I would like to omit the motel on the left while keeping the other elements.


Posted by Thomas Allen Bethune at 10:16 AM No comments: